Maa Durga: An Introduction To The Goddess That Will Make You Believe.

Maa Durga: An Introduction To The Goddess That Will Make You Believe 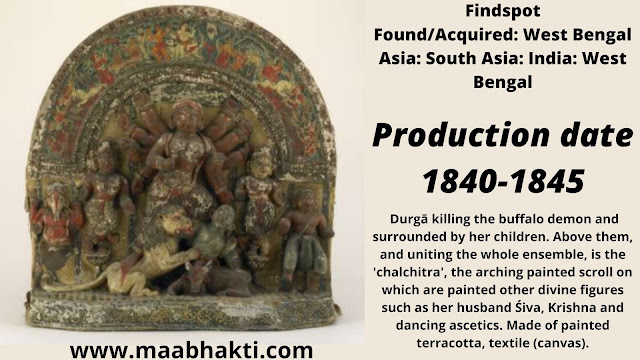 In Hindu mythology, Durga (दुर्गा) is the warrior goddess. She is considered to be the personification of feminine energy and spirituality. Durga literally means “impassable” or “invincible, unassailable”. The word is related to the word durg which means “fortressThe word “Durga” and related terms appear in the Vedic literature.
Durga is a Sanskrit word that means “difficult, hostile” and is also one of the names of the goddess Parvati or Uma. It has roots in ancient Indian literature such as in  Mahabharata, and Ramayana,
Durga, a demon-slaying goddess from Hindu mythology, likely existed before the classic text called Devi Mahatmya was written.

The text is estimated to have been created between 400 and 600 CE. It describes how Durga adapts in nature and form to achieve her goals of defeating demons.There are many epithets for Durga in Shaktism and her nine appellations are Navadurga: Shailaputri, Brahmacharini, Chandraghanta, Kushmanda, Skandamata, Katyayini, Kaalratri, Mahagauri and Siddhidatri. A list of 108 names of the goddess

One famous shloka states the definition and origin of the term “Durga.” It reads, “Durge durgati nashini,” which means Durga is the one who destroys all distress or one who eliminates suffering.

The first day of Navratri is celebrated as Devi Shailputri. She is a form of Mother Nature and is worshipped on the first day. Devi Shailputri is depicted as a Goddess riding on Nandi bull, and the famous Durga temple of Marhia Ghat, Varanasi holds a massive worship for Devi Shailputri during durga pooja.

The second day belongs to Maa Brahmacharini. She wears white clothes and lives in the mountains pursuing asceticism. She is the goddess of sacred religious knowledge. The Brahmeshwar temple is dedicated to Maa Brahmcharini. It is located along the Ganga Ghat in Varanasi. Another famous Durga temple is Maa Maa Brahmeshwar temple along the river Ganga at Balaji Ghat in Saptsagar, Kashi.

Maa Chandraghanta is the third form of Nav Durga. She is depicted as a goddess with a warrior spirit and her third eye is open. Her weapons are in her hands, and her mount is a fierce tiger. Maa Chandraghanta is worshipped for attaining courage and bravery, and her famous Nav Durga Temple is located in Varanasi with the name, Chandraghanta Mandir.

The fourth form of Goddess Durga is Kushmunda Devi. Her name signifies a cosmic source of warmth and energy. According to the scriptures, she created the world with her smile. Devotees appease Devi Kushmunda to gain strength and good health. The famous Kushmunda Nav Durga Temple is located at Ghatampur town in Kanpur district.

Skandmata is the mother of the god of war in Hinduism, Kartikeya. She is the fifth form of Nav Durga, and she is the goddess of prosperity and wisdom. Mounted on a lion, she has lotus in her hand. The famous durga temple for this nav durga is located at Jaitpura in Varanasi.

Maa Katyayni is the sixth and fiercest manifestation of Goddess Durga. She was born out of anger in a hermitage by the name of Katyayana. She saved the world by destroying the demon king Mahishasura. Known as Bhadrakali and Mahishasuramardini, she symbolizes destruction of ego and negativities. Her Nav Durga mandir is Katyayani Baneshwar Temple that is located at Aversa, Karnataka.

The seventh and one of the fiercest form of Nav Durga is Maa Kalratri. She is mounted on a donkey and is venerated as the destroyer of ignorance and darkness. The famous Nav Durga temple of Kalratri is located in Varanasi. On the seventh day of Navratri festival, special Aarti and Puja is performed in this Maa Durga mandir to invoke Maa Kalratri.

Mahagauri is the eighth manifestation of Devi Durga. She holds Trishul, mudra, Damaru in her three hands and blesses her devotees with her fourth hand. She is depicted in a white or green sari and a bull as her mount. Worshipping her purifies the soul and forgives all the sins. Her famous Sh. Her famous Shri Sidh Shaktipeeth Mahagauri temple is located at Shimlapuri in the district of Ludhiana in Punjab.

The last day of Navratri is dedicated to Maa Siddhidatri, the ninth form of Devi Durga. She is the Goddess of all the Siddhis or perfections. It is believed that Lord Shiva worshipped her to gain all the eighteen Siddhis for creation. By worshipping her and visiting her shrine, one may gain wisdom, knowledge, and prosperity. The famous Durga mandir that is dedicated to Devi Siddhidatri is located in Sagar, Madhya Pradesh.

Worshipping Nav Durga can eliminate all your sorrows and bestow you with power, wealth, wisdom, and prosperity. In the nine days of Navratri seek Maa Durga and appease her by performing a Nav Durga Puja. You may worship her with Nav Durga Aarti and recite powerful Nav Durga Mantras to appease her Jai Mata Di! Poinsettia Care: The ‘Only Time’ You Should Water Your Festive Plant or Risk ‘Rotting’