Kalki Avtar In Mahabharata: Interesting Facts About The Avatar Of Vishnu

Kalki Avtar In Mahabharata: Interesting Facts About The Avatar Of Vishnu 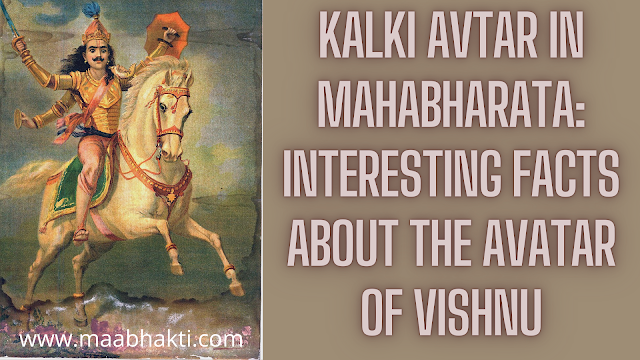 The Hindu god Vishnu is believed to have 10 incarnations, the Kalki avatar being the tenth. The incarnation is expected to be born near the Aswatha tree and will have all of Vishnu’s virtues. He will also study at a house built next to the Peepal tree in Vrindavana. This place was close to mathure. A divine house was built near the river Yamuna at Bengali-ghat in Vrindavana. This place was close to Mathura. At this place, not an ordinary boy was to take birth; but the Lord Kalki himself had to appear at that place in Kali Yuga.

When is Kalki Avatar Expected

Lord Kalki is expected to reincarnate on the 12th day of the bright half of the month Vaishakha during a Hindu year known as Kali Yuga. According to some beliefs, he will appear at the end of this “Kalpa”, which is about 432,000 years away.

Kalki avatar would have shaved his head and just then, Maharshi Diptiman would arrive through skyways and be consecrated by him with Vedic hymns. The sacred thread would be worn and the sacred hymn “Gayatri” would be recited in the pious sacrament of wearing of sacred thread, called Brahma Sanskara

In reality, Kalki did not need the teachings of the Vedas because he recalled the text of Shruti. His arrival on earth had a purpose and required teachings of a certain kind that could only be obtained by Prashuram.

Kalki would be staying in Mahendra hill. This is a very huge and grand place, where he would have several powers and miracles. These powers will not be similar to those of the previous avatars, but some new powers would be used by Kalki

How to Identify Lord Kalki

It is said in the Shrimad Bhagwat Purana that Lord Kalki will be born as a son of an ascetic Brahmin named Vishnuyasha. He will destroy sinners by riding on a horse or vehicle named Devadatta and re-establish religion.

The Puranas, which are a type of Hindu scripture, talk about Kalki. The Lord will appear with four arms and will not be born as a human. He will have a conch shell, discus, mace, and lotus in each hand.

Therefore, before the arrival of Lord Kalki, Vishnu Yasha and his wife Sumati would be placed in that divine house by Swami Jagdishwaranand Ji from his Ashram. The secrecy of the avatar of Kalki would not be maintained if Ashram Vishnu Yasa lived.

Brahma knew that Lord Vishnu was incarnating on the earth. He asked his swift votary wind to go to the delivery room and awaken Lord Vishnu and convey the message to Him that the birth of a person with four arms is rare even for gods to see. It would only make sense if he could assume the form of a common man with two arms

The swift wind would do as asked. He would tell Vishnu what Brahma had instructed. After listening to the message of Brahma, the four-armed Vishnu will have immediately become an infant with two arms. The four objects of his arms, conch, discus, mace and lotus will disappear. Goddess Ambika will cut the umbilical cord so that this avtar can grow fast in minimum amount of time.

Vishnuyasa was told by Diptiman that the birth of Kalki had a certain purpose. The Lord did not use eight divine powers in childhood or any other yugas except in Kali-yuga, where he used eight divine powers in his childhood. Parashurama would make him serve the Kamdhenu cow. As He again would not be possible to get enough of his mother milk.

Kalki has returned to earth, but remains in hiding. He eats the fruit and milk brought to him by the Kamdhenu Cow, and works all day creating destruction as light. The evening he assumes a human form and rests.His main objective is to destroy wicked people or Malechha people completely. By ridding the Earth of the sinners, he has to establish Dharma, and therefore, Satyayuga will start.

Vishnu decided to get Kalki initiated. First, he called for a recitation of the sacred hymn Gayatri, then he asked Brahma Sanskara to initiate him. Once Kalki was initiated, he started studying immediately because he would grow up and be ready to study quickly. 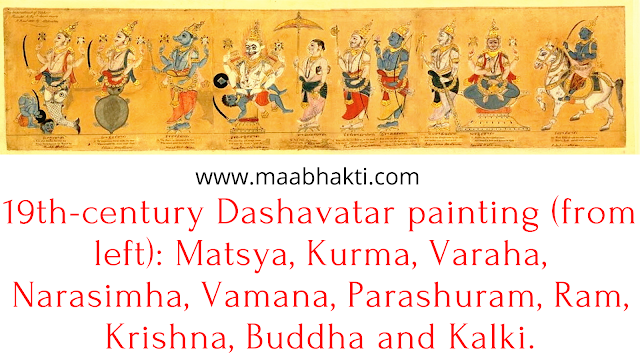